It´s a concidence, but today, Day of the Spanish Armed Forces, my post is about military music and drums.

As a percussionist, I have studied Swiss (Bassler Trommel), French (Batard, Coup de Charge, Coup Anglais, Moulin, Coup du Rigodon...), German (Druck Ruf,  Schleifschlag, Französischer Ruf...), Dutch (Lange Voorslag, Dubbele Slagen, Verwisselslagen...), Scottish and American drum rudiments. I know the 40 PAS rudiments, and the endless possibilities the Hybrid Rudiments have to offer... Sadly, and despite it been a contradiction, I know nothing about the Spanish drumming tradition.

As we know, the origin of the drum is, no doubt, military, and because of the Moor Invasion during the early Middle Ages, Spain was the fist European country to get to know the instrument. The  tabor (atambor, atabal) soon found its place in the military world and, if we have into account that Spain ruled the world during some centuries, we have to assume the drum took a very important role in the most powerful military force at that time (also, Spanish kings paid Walonian and Swiss mercenary forces, being the latter those who iniciated the rudimental tradition).

For all these reasons, we can conclude that, despite being quite unknown nowadays, Spain must have had an important military drumming tradition.

This is what I´ve doing lately: investigating and studying everything related with our national tradition, and future posts will be dedicated to this issue.

In the meantime, I´d like to share with you some of my "little discoveries", which show me that we have military music more assumed that we think. 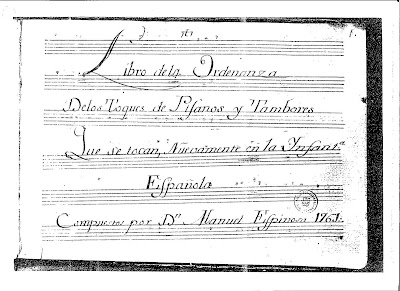 In this booklet we can find a Retreta (retreat). In the 1769 Royal Orderly Book by HRH Carlos III (which was revoked as late as 1978!), it is stated that the Retreta is to be played "when the General in charge decides that it´s time for the troops to retire to their tents or barracks at the sunset. In march, it indicates when the column has to turn left". I´m sure it sounds quite familiar to you: 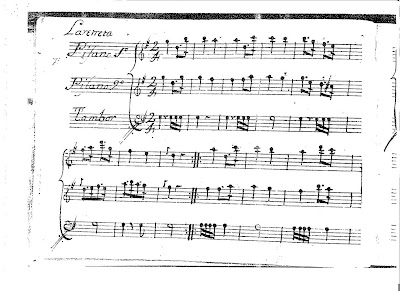 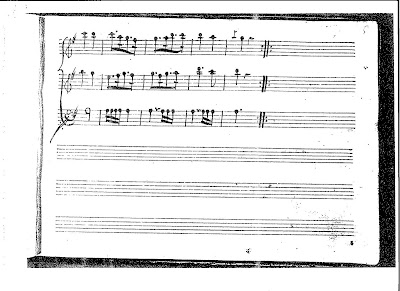 You can hear it, played by a "banda de guerra" (war band):

The little discrepancies you can hear between the interpretation and the score is because they are using a later version (1769). This eight years younger edition is kept at the Spanish Royal Library.

Luigi Boccherini, who lived and died in Spain, obviously heard this retreta, and literally quoted it in his famous work (performed by the Boccherini Ensemble):

In the twentieth century, Luciano Berio wrote his own version:

Berio orchestrated his work in a very intelligent way, as he uses snare drum ostinatos, and the first instruments to play the theme are the flutes, which takes us back to the origin: fifes and drums.

A more recent version is the one by David del Puerto. You can hear the Gijón Symphony Orchestra live on February 7th, 2009 at Teatro Jovellanos in Gijón under the baton of Óliver Díaz, with Rafael Casanova on baroque timps (the same instruments I mentioned on the article "Baroque timpani restoration"):

This version, which uses timpani instead of snare drum, doesn´t convince me from a historic point of view.

It´s funny to see that a theme we normally associate with Boccherini is, in fact, from Manuel Espinosa... It may even not be from Espinosa himself, being he a mere compilator of an already existing military tune.

The Spanish military music catalog is full of fantastic surprises... Gradually, I´ll tell you about them.

(I´d like to thank Manuel Mefre González for his invaluable help and guidance).