Music and the sea.

Last Saturday I went sailing. It was blowing an 11 knots NorthWest wind, which backed to West and became calmed as the evening progressed. Luckily, it didn´t rain, as the forecast predicted.

Hugging to Candás, the mainsail tighten on the centerline, the Genoa jib at a fist distance from the spreader. All sails flat, perfectly trimmed, the boat heeled to leeward, and all the crew to the windward side... We got a speed of six knots, but three meters high waves slowed us down.

On the way back, when we left the green light to starboard, night fell. A little bit later, we left the nine white flashes of the Amosucas West cardinal signal to portside.  At sea, it´s a pitch-black night, but Gijón shines some miles to the south...

What does this have to do with music? Who knows, maybe it depends on how you look at it... The thing is that, this sailing day, has made me remember a fantastic piece of music: "Four Sea Interludes", from the opera "Peter Grimes", by Benjamin Britten.

This composer wrote magnificent percussion parts for his works with the guide and advice given by James Blades. I didn´t get to know Mr. Blades (despite his long life), but I was fortunate enough to be taught by one of his students: Nick Cole. Also, the influence of Blades at the Royal Academy of Music (where I studied) is very significant (the room in the basement is named "James Blades Percussion Studio"). For all these reasons, the percussion parts by Britten are quite familiar to me.

"Dawn", the first of the interludes, is beautiful, and I can almost feel the cold of a clear morning by the sea. The second one, "Sunday morning", is fresh, clean, clear... "Moonlight" is fantastic, which makes me think of a summer night, a warm breeze blowing, the moon lighting a white thread on the calmed sea... Flute and xylophone are, in my imagination, shooting stars which brighten up a clear sky full of still stars. Here goes this fantastic piece of music in a version by the Boston Symphony:


As percussionists, I´m quite sure is the fourth interlude ("Storm") the one we know better.

The timpani part is crucial for the mood of this interlude (I´ve played it some years ago at the Academy), but the most famous one is the tambourine part.

When I played that part (sorry, I have no recording of it), I used a small instrument (8 inches) so as to help me with the dynamics, with tinplate jingles to get a higher timbre than that produced by berillium/copper ones, so I can blend better with the flutes (the instruments I´m doubling). I also want to make contrast with the somber character of the beggining (the last part seems to recreate sun beams trying to get across the clouds, the storm about to finish).

To make the roll easier (which I play with my middle finger), I glued some sandpaper (thinest one) on the tambourine. This way, I always get friction, so I always get a roll, not needing to wet the finger or things like that.

The tambourine part is as follows: 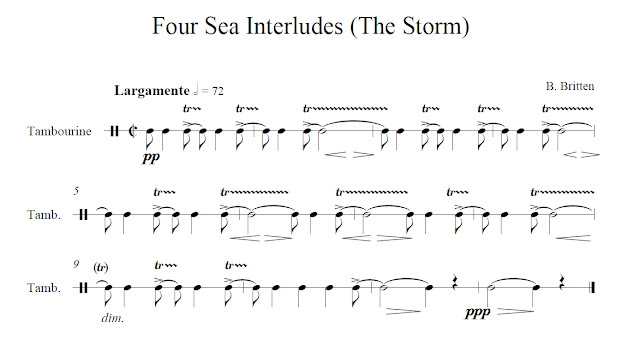 And this is my interpretation:


See that I play softer those notes after the rolls so as to phrase like the flutes. Crescendi and diminuendi are difficult, so you better practise them... The good thing is that rolls start with an accent, making them easier to play (the beggining is more secure with the accent). To facilitate the last roll, I situate the tambourine in a vertical position, so the jingles are not stuck on top of each other, they are free to ring, and react better to my finger.

So... A sailing day inspired me to write about an important excerpt of the tambourine repertoire. Weird? Maybe...