Today, I´ll write about the way German, Dutch, and centre-European timpanists in general set their instruments up.

Before I go on, I´d like to thank Nick Woud, timpanist for the Royal Concertgebouw Orchestra, who has helped me with his opinions and gave his permission for using some of his engravings.

The "normal" way timpani are set up is commencing with the low one on the left, ascending untill we reach the highest one on the right, imitating the disposition of a piano. That´s how it´s done in Spain, France, United Kingdom, Italy, United States...

The way our instruments are set up in Germany and Holland is the contrary, with the low one on the right side, and the high one to the left side.

The reason behind the first option is clear: imitating the way notes are set up in a piano. This option is more recent than its German counterpart.


There are various explanations regarding the low drum in the right side option:

1.- It is said timpani were played, sometimes, by double bass players. As we know, in this instrument, the low string is to the right side on the bridge, thus making for a double bassist playing timpani very natural to adopt the low to the right configuration. 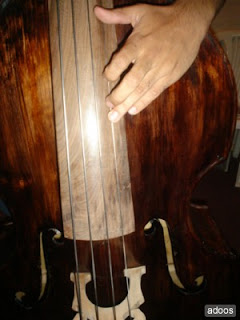 I can´t find this theory convincing at all. We know timpanists and trumpeters were associated in very powerfull guilds, and all knowledge was transmited from master to apprentice in a very secretive way: only the iniciated could work as a timpanist, and strong punishments were reserved for those non-members trying to play our instruments.

This secrecy and oral tradition makes for us to know very little about the techniques used at that time, and very interesting traditions as the "Schlagmanieren" scape to our understanding.

For this, I cannot think of a double bassist trying to play timps without permission from the local guild, so this option is dismissed.

2.- Other reason to explain this set up is that, being right-handed the vast majority of the population, timpanists would like to play the the tonic with this hand (the strong one). This would be valid if drums were tuned to an interval of a 5th, as the tonic would be to the right side: 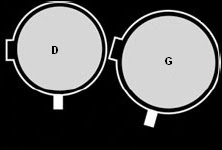 But drums were tuned to an interval of a 4th, not a 5th. For this, the tonic was on the high one, not being able to be hit with the right hand: 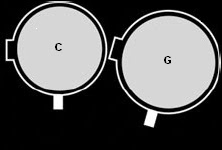 Again, this explanation is not valid.

3.- As you know, timpani, together with trumpets, were associated with cavalry (and from previous threads, you know fifes and drums were associated to infantry) and were mounted in pairs on horse back.

In order to mount, the rider always does it from the left side. Check these videos:


As you see, a horse is always mounted by its left side, and that´s due to the riders carrying swords or sabres hanging from their left side, so these weapons could be pulled out with the right hand. Mounting through the right side would have been impractical, as those hanging swords would have interfered with the process. If a timpanist has to mount with two drums on horse back, the easiest way is to place the smaller drum to the mounting side (left) to make this task easier, placing the large one to the right non-mounting side. All iconography shows timpany set up this way.

When timpani "dismounted" and took their place into the orchestra, this set up remained among timpanists, a tradition which still survives in Germany, Holland, Austria, Hungary, Switzerland...

This is the reason that better explains the low drum to the right side set up (some other instruments still adopt this configuration, such as bongos and tom-toms in a drum set).

The contrary is a newer one, and mimics a keyboard configuration.


As a curiosity, I found something that I thought invalidated my theory, and that´s an engraving property of Nick Woud:

You can clearly see the low drum to the left side of the timpanist, but Mr. Woud told me it´s a mistake by the printer or an artistic license.

So, my bet for explaining the German configuration is the one associated with the cavalry.