Today, I´ll speak about the vibraphone part for West Side Story.

As percussionists, we all have faced this hard nut to crack at some point, as this fugue (“Cool”) is asked very often in auditions. Luckily enough, I have played this work several times, with different orchestras and different parts (sometimes xylo, sometimes vibes), and it´s always a pleasure to play what, in my modest opinion, is a master class in orchestration (apart from a fantastic piece of music).

It maybe is the most famous excerpt for vibraphone and, even that, it´s very often played with a wrong note, a note which has taken deep roots in our “percusive memory”... I´m talking about the G flat circled in red we can find in the original “particella”:

Because that´s the way it´s writen in the original part, the Orchester Probespiel book (the only one I know containing this excerpt) literally copies it, giving one more step ahead to perpetuate the mistake:

As we already know, the vibraphone part doubles the flute and, if we have a look at the score, this issue has an easy solution (see the coincident notes circled in red). Have a look also at the phenomenal orchestration, dividing the flute line between first and second players: 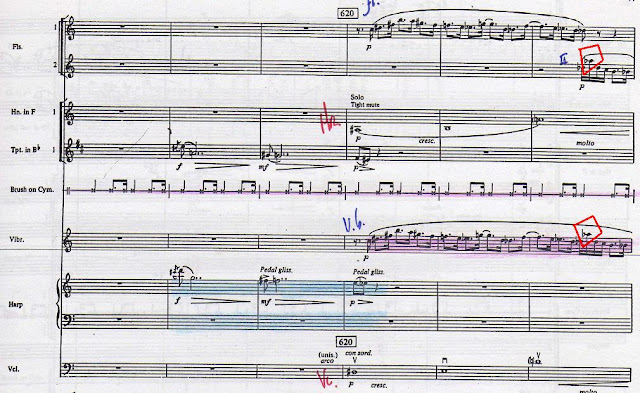 We can see both flute and vibraphone play A flat, clarifying which note vibes should play. The copyist commited “lapsus calami”, and his G flat (instead of the correct A flat) stayed among us.

Having a look a little bit ahead (bar 697), we find another proof of A flat being the correct note, as we can find the same motive (transposed):

We can clearly see the interval between the 4th and 5th note (marked in red) is a perfect 5th and not a perfect 4th (as it was in the first picture). Apart from that, all instruments playing that same motive in the fugue play that perfect 5th interval, proving the G flat is a wrong note.

The following audio archive is by the Gijón Symphony Orchestra, and it was recorded live on December 10th, 2006 at Teatro Jovellanos in Gijón (myself on vibes, playing A flat instead of G flat):


I would also like to show you that fragment in the original movie:


As a matter of interest, Bernstein himself conducting this work (including the fragment we are talking about). You´ll have to see it on YouTube, as embedding is disabled for this video:

If you are curious, you can see all videos of this recording, where you can find Bernstein complaining on Carreras (legendary), how Carreras swears, arguments with the clarinet player, Bernstein telling the producer to shut up... Best videos out there ever!