He who has ever played repertoire by Mendelssohn, Schubert, Dvorak, Schumann, Tchaikovsky, Weber, Gounod, opera (mainly Italian and French works) and, as a particular case, Spanish zarzuela, is very likely to have found on many occasions notes that do not “match” with the harmonic/melodic context and, depending on his audacity or conservatism, would have decided to leave those notes as they are, or change them looking for a better solution.

It is shocking, indeed, to find so many dissonances in the Classic and Romantic repertoire... So obvious dissonances, that I tend to think the composer, lacking a third drum or the possibility of a quick note change, prefered to write that note (even “wrong” or out of context) rather than sacrifying the effect that a timpani stroke could add to the dramatic effect on a specific part of his work.

Sometimes, the contrary occurs, and the composer opts for silencing the timps (while trumpets, for example, go on playing). That makes me think that, would have had the composer the resources to improve his timpani writing (more drums, or the possibility of quick changes), he would definitely had continued the line that, due to the limitations on timpani writing, was left interrupt.

We have, then, both cases: when the composer writes down a note knowing full well it doesn´t match the context, or when the timpani get silenced because he can´t write down a note matching that same context. I´ll write refering to the first case. 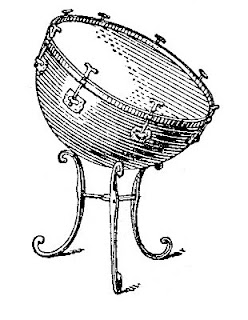 We already know that, due to the intrinsic limitations on timpani writing at that time, composers used undeniably wrong notes, but my opinion is that those dissonances are not intentional, nor mistakes (I don´t think Verdi wouldn´t have realized a G natural clearly clashes in an A flat context). If composers have had more developed instruments at hand, permiting quick changes, we woulnd´t be disscusing this issue, as it would have been solved two hundred years ago.

Controversy arrises when, having to play these works, we have to make a decision on wether to play them “on the ink”, or modify the part to correct those errors.

I´m a firm supporter of the editing option, but always agreeing with the conductor and keeping the style, character and nature of the work. Almost every conductor I have worked with was keen and receptive to this kind of “part altering”, when not clearly involved in the process (Óliver Díaz considers these changes even before I can arise them to him!). Always considering the musical, historical, aesthetic, harmonic and melodic context, I can´t think of re-writing parts as a problem as long as we show the maximun respect for Music. I´m sure composers would have writen differently should they had the resources.

My method consists in a preliminary study of the score together with the “particella”. It´s crucial to use your ears in a very critical way, both to identify mistakes (wrong notes, lenghts, articulation, phrasing...) and to propose solutions. In order to justify the changes, I investigate the harmonic context, the bass line, what other sections are playing (depending on the repertoire, I look into one section or another), who is playing in my same octave (a dissonance at a distance of a second is harsher than one at a distance of 16th or a triple octave). With all that information, I make a decision whether to make a change or not, and what change to make once I decide to go for it. Once the part has been edited, it has to fit the musical context perfectly and, again, your ears will have the last word. As a precaution, never assume the part is correct (specially in opera, and more specifically, with Kalmus editions).

As an example, we can use Verdi´s “Requiem” and, more specifically, the begginning of the “Dies Irae”. This video was recorded live on January 29th, 2010 at Teatro Jovellanos, featuring the Gijón Symphony Orchestra and the Orfeón Donostiarra under the baton of Óliver Díaz. For a better listening experience, I recommend using full range speakers, as headphones or computer speakers don´t have enough bass response, thus making the changes less audible.

To better follow the process, here´s a link to the full score (free and legal):

You can also download the edited version of this introduction as a pdf file here:

It´s in bar nº3 where we encounter the first problem, as part two and four of the bar (at least in the Ricordi edition) have no accent:

My interpretation is to accent those notes in bars 3 and 4 in order to imitate the phrasing of trumpets and horns. The last two notes are played with more emphasis to prepare the choir entrance. That G in bar 5, I let it ring for four bars (plus downbeat on the fifth one) to match the ornate pedal played by winds and strings. I mute that note once the choir ceases its intervention and the strings start they diabolic 16ths.

The next beat is a mixture of the motive played by woodwinds (the 32nds are taken from them) and the rhythmic cell by the fourth basoon, trombones, oficleide and double basses (see bar 20 in the score):

Offbeats coming next have to be played very precisely, as timpani are the only instrument playing that motive: 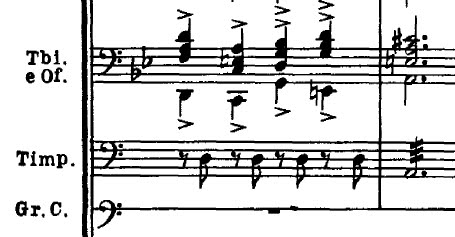 With regard to the next roll, I prefer starting it softer, so I can play a crescendo to accompany the upwards scale by woodwinds and strings.

The next bars are the most problematic ones, as the notes chosen by Verdi have nothing to do with the harmonic context.The chord sequence is G9b-Cm-F9b-Bb-G7dim-Ab (see bars 31 to 36 in the score), so it´s very clear that G and D (the notes used by Verdi) create obvious dissonances.

Keeping the original descendent interval of a fifth, what I do is to double the bass trombone, oficleide and basses in the choir parts. Also, I play the 8th notes which Verdi leaves in blank twice, so as to match the motive played by the trumpets.

In the edited part, do not understand the tie as “legato”: what I want to mean is the existence of two difference expresive units, one represented by the tie, and the other by the dots.

In the context of E major, a G natural doesn´t match at all, so it is for this reason that the next roll is played on E natural (same note played by basoons, oficleide and double basses).

Two bars afterwards, I play A flat instead of G because that´s the harmonic context (no need to say that minor second dissonance is unacceptable).

The rest of the interventions present no problem, as they literally double the basses part.

The problem with these kind of modifications is that, if no change is made, the result is obviously dissonant but, if we edit the part, many changes have to be made.

To prove my decision, I have to say Verdi knew pedal timpani (he maybe wrote with Carlo Antonio Boracchi´s instruments in mind -he was timpanist for La Scala-), that he wrote a roll with changing notes (“Otello”, first act, six bars before letter I), that he wrote an ascending line from B flat do D (“Requiem”, “Dies Irae”, bars 74 to 88). If Verdi wrote these changes, why he didn´t so in other parts in the “Requiem” or other of his operas? It´s surprisingly contradictory that Verdi had, at the same time, such a conservative timpani writing in some parts, and such an innovative one in others in the same work

My criteria is to make Music and, if that implies changing notes, I see no problem in doing it.

In my next post, I´ll write some more on this fascinating issue and, for that, I´ll use the “Sanctus” as an example.

I´d love to hear your oppinions on this subject, so any comment is welcome.