New entry after almost two months without writing. I love managing Percusize Me! and tlike offering my readers articles or opinions of their interest but, if you are a follower, you may already know about my passion for the sea and navigation: this is what has kept me away from you for a while. Recently, I took my exam for becoming the Spanish equivalent of an Yachtmaster Ocean and, being the exams quite hard, the time devoted to study didn´t allow me to update Percusize Me! as often as I would have like. Everything is more calmed now (and my exams have been a total success!), so I can retake the blog with renovated energies.

Today I´m bringing an article which, in my opinion, is devastating. On it, Mike Tetreault (my mate at the Royal Academy of Music for two years) explains how he prepares an audtion, how a friend of him is sacked after three years with the Boston Symphony, how the hard preparation doesn´t even take to the second round, his wishes, his frustrations, the fairness or unfairness of a system looking for machines instead of musicians... I felt so identified with him, that thought I had to share it with you. Here´s the link where you can read it:


What is a fair system for auditions? Starting with the fact that percussion audtions are quite ridiculous due to percussionists been asked to play orchestral excerpts totally out of context and with no accompaniment, this is where I see the first mistake. I only played once with piano accompaniment ("Rosenkavalier" timpani part), and only once was I able to play with other musicians (all the percussion section plus piano accompaniment in a memorable Royal Opera House audition). If our job is to play, accompany and make music together with other instrumentalists, to play excerpts by themselves is, at least, bizarre. Having said this, I don´t mean I like the French way, a system which asks for pieces featuring 15 cowbells, 9 toms, 7 woodblocks, tambourine, snare drum and five timpani with piano accompaniment... I will never understand why this kind of solo works are asked for an orchestral audition. It is as if you were attending a job interview to gain a mechanic post and you were asked to cook some spaghetti... 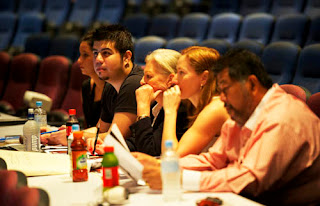 Does a screen assure a fair audition? It depends on the case... I´m really suspicous about the last auditions I played behind a curtain; on the contrary, I have very nice memories of those I played in Rotterdam and Manchester. The one I won in Lisbon was behind screen, but that´s a loooooooooong story, and the one I won in Tallin was also behind screen, but that´s, again, another horror story... A behind the screen audition ensures no discrimination by reasons of race, sex or any other condition is taken (go and talk to the female trombonist under Celibidache in the Munich Philharmonic...!). I don´t dislike this option, but would never (in the case of being in the panel) ask for it in the finals: I would like to see the player, his attitude, commitment, style... In the same way, as a candidate, I want to show those qualities to the panel, so I prefer a final round with no screen. This system is not perfect, and it can be biased towards the candidate prefered by the panel.

The trials method favoured by the British, in which various people "win" the audition and are tested trough a variable period of time, is a favourite of mine. A post in an orchestra, in my opinion, cannot be granted just by playing isolated excerpts: is for this reason that British orchestras "try" those who have played a good audition. Checking how they do in "real situation", they employ a good musican, not a mere "excerpt player".

Nowadays, with everybody using Facebook to advertise their success, I consider Mike Tetreault and Lee Vison to be two very brave musicians, as they had enough balls to say "I haven´t win". The "everything is fine", "I´m doing very well" attitude is easy, but the honest one, admitting "I didn´t get to the second round", or "I´m not giging very much", is the brave one. I really wish them all the best.

This auditions issue can be lengthy, but it´s something that will come out on this blog in the future. For now, I´d like to read your opinions about it.

I, for now, will quote a phrase in the article:  "Give me success or take this desire away from me. One of the two".