So used to see them in the orchestra, we don´t realize that many of the percussion instruments have an "exotic" origin. Today, we´ll talk about them.

To get in situation, we have to know janissaries, elite corps serving the Turkish Sultan. These troops were young christians trained under a strong discipline, and they got to constitute a fearful army which expanded the Ottoman Empire through North Africa, the Arabian Peninsula, Greece, Albania, Hungary, Romania... They even sieged Vienna.


These elite troops were accompanied by military bands (the oldests known) named mehter. We know these bands existed in the VIIIth Century, and Europeans got to know this musical expresion in the Crusades. Timpani, first percussion instruments to join the orchestra, were used by janissary to frighten the enemy in the battle field. Later on, and always to suggest a military or eastern carachter, European composers added these mehter instruments to the orchestra. So, the bass drum-cymbals-triangle combination became a standard, and was used by Mozart in "The Abduction from the Seraglio", by Haydn in his "Military Symphony", Beethoven in his Symphony No.9... The new instruments added to the orchestra were:


Zil. Even today, the best cymbals are those from Turkey, and we have to remember there´s a brand named Zildjian.

Dabul. Ancestor of our bass-drum. See the use of a light stick in the left hand, which still is used today in historically informed peformances.

Nakkere. Greatly used in Spain during the Middle Ages.

Other important instrument (know in disuse) was the turkish crescent or "jingle-johnny": 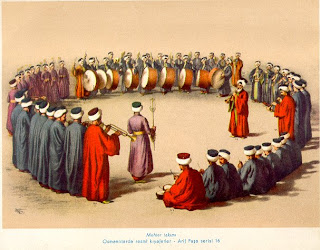 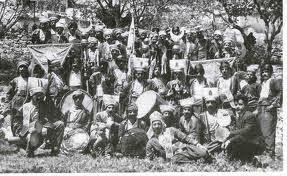 I thougt this kind of music was lost centuries ago, but YouTube gives me (again) a nice surprise in the form of some pieces of musical archeology.

To prove the influence of Turkish music in Europe, and how new instruments joined the orchestra, here we have Mozart´s "The Abduction from the Seraglio" overture, played by the Wiener Symphoniker (see the bass drum played with rute):


From Rossini "Il Turco in Italia" (I love this version, with rope bass-drum, played with rute, and very small and thick cymbals). This version is by the Orchestra of the Opernhaus Zürich: