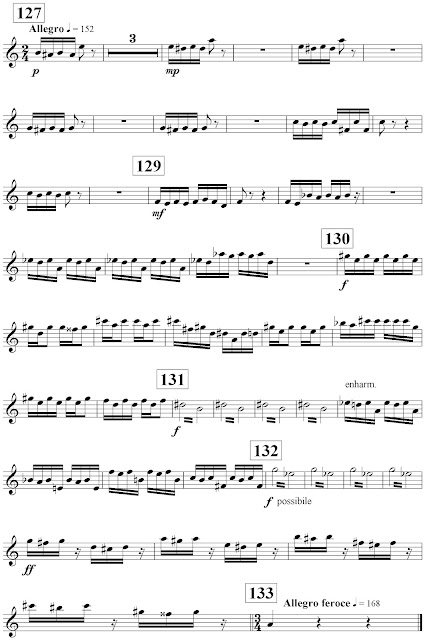 The tempo indication is 152. Obviously, this will depend on the maestro, so we better practise faster and slower speeds so as not to get surprised by different tempi. On this video, I´ve chosen a tempo of 165. It´s a (let´s say it that way) audition tempo, maybe not to musical, but it´s a speed that proves a panel I can play fast and accurate; it´s a tempo that, when competing with other candidates, can tip the scales in your favor (or not... Who knows!).

My phrasing idea until the "storm" of 16ths starts (four bars before 130) is as follows: A little weight on the first note, get all notes from that initial energy, and taper down at the end: 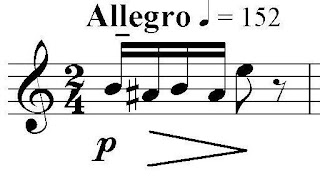 I don´t know if that phrasing can be heard due to the compression applied by the camera, but that was my intention.

Equally important is the dynamic gradation: piano at the beginning, mezzo piano four bars later on , mezzo forte at 129, forte at 130, etc... Again, that was my intention, but I don´t think the compression makes it easy to hear wat I wanted to communicate.

It´s crucial that, during the rest bars, we keep feeling the 16th note pulse and look at the condutor. You may have realized that I raise my head to stablish visual contact with the hypothetical maestro: never ever get caught by a conductor not looking at him. When ever possible (this excerpt, because of its difficulty, it´s not prone to this), I always raise my head from the instrument to look at the conductor.

We have to be very careful with the rhythm played by the strings in 128, as they start the bar with an 8th rest, producing a syncopation. Don´t let that confuse you: our tempo and rhythm have to be rock solid. The same happens at 129, where the motif is taken by the double basses: 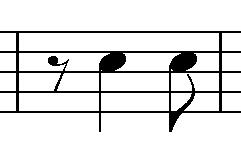 Four bars before 130, I change the logical sticking and I start with my left hand so as to play the fourth interval  between D and A with my strong hand (right one).

Until 130, our job has been a "colouring" one but, from that rehearsal number on, we are doubling either the woodwinds or the strings. We always have to be careful with our playing, but specially when doubling, as mistakes are more obvious due to some other instruments playing our same line.

At 131 and 132, where we are playing an upper pedal together with the strings, even we have a "generous" dynamic, I prefer to play a little bit less to let the other motif to be heard.

With respect to the ending (four bars before the allegro feroce), some players do an accelerando to prepare the new tempo, but I think it´s more effective and dramatic to make the change súbito (so it has a more ferocious character), but that doesn´t depend on me, but on the man with the batton. In an audition, I prefer to stick to the paper (and my own taste) and not play it. Different conductors involve different interpretations but, in an audition, I prefer to literally play what is writen so the panel doesn´t have to think, is he doing the accelerando because he knows the music, or because he cannot keep the tempo? When in doubt, I prefer to stick to the paper.

Last thing: you can see I play the last note with my right hand (contrary to the natural sequence). With that, I try to get the note that is supposed to be the strongest one with the recquired energy (I´m right handed).   ﻿

I urge you to listen to this fantastic piece of music. Do not miss the tremendous ending.