Do It Yourself Turkish crescent.

You already know how much I like historical percussion and early music. I have been wanting a Turkish crescent for quite a long time, so I bought some stuff and decided to go for it. Before going on, I´d like to introduce you to the instrument: a Turkish crescent ("jingle Johnny", "chapeau chinois", "pavillon chinois", "schellenbaum", "cevgen", "capell cinese", "padiglione cinese", "mezza luna"...) is an instrument many centuries old, but Europeans got to know it in the 16th century because of the Turkish elite troops, the jannisaries. It was inmensely popular as a military instrument (both in bands and orchestras) untill the 19th century, falling into oblivion since then. Lully, Haydn, Beethoven and Berlioz were some of the composers who wrote for it, and it was an important member of the sistri, being part of the bassa musica in the Italian opera from the ottocento. 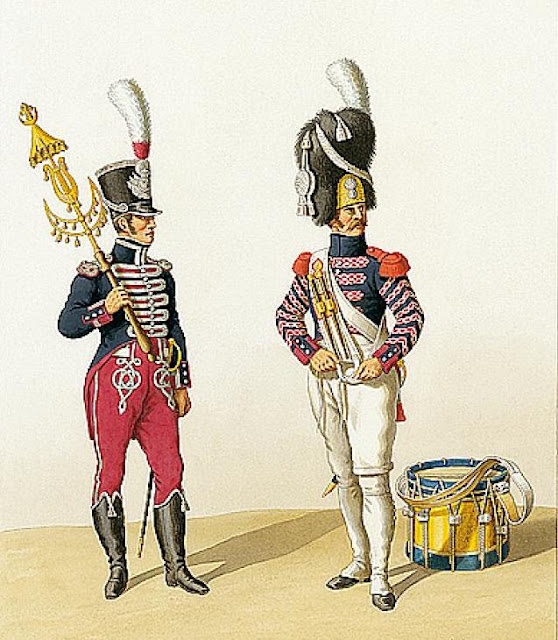 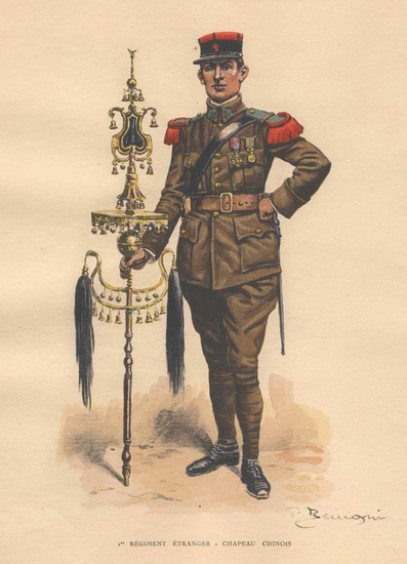 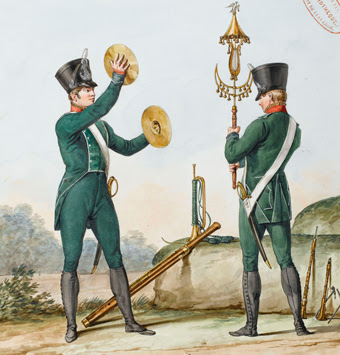 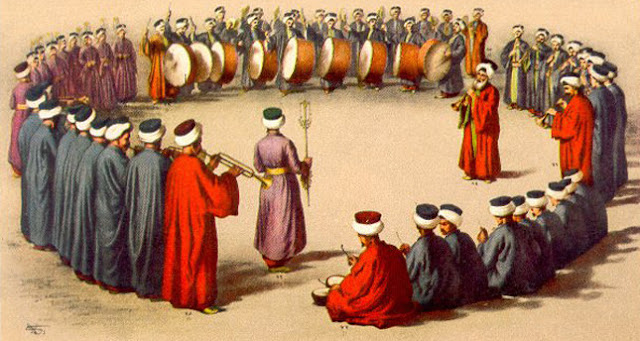 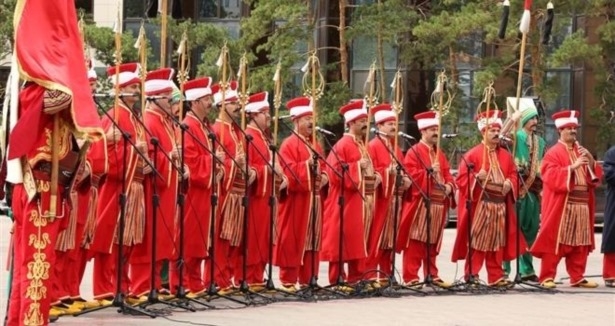 Here we can see a manuscript note stating the percussionists in the percussion section of La Scala during the 1843 spring season. We can see the Turkish crescent was part of the section (it ALWAYS was, and it was ALWAYS played together with the bass drum and the cymbals. The parts were never written, but it went without saying -see Lichtenthal, Picchianti, Dacci and others-). We can also see two different players are assigned for the bass drum and the cymbals, which busts the myth of both instruments being played "alla turca" (by one player) in Italian opera (we also have poster bills, hand bills, payrolls, documents, iconography and letters proving this). As a curiosity, because the date (1843) and the mention of a drummer, we can deduce "Nabucco" was still being played (it was premiered in 1842). "Nota dei professori d´orchestra al servizio dell I. R. Teatro La Scala per la stagione di primavera dell´anno 1843. Timpani: Carlo Antonio Boracchi, tamburo: Augusto Stehle, triángolo: Leonardo Negri, capell-chinese: Antonio Sala, piatti: AntonioTangi, gran cassa: Gaetano Rossi". 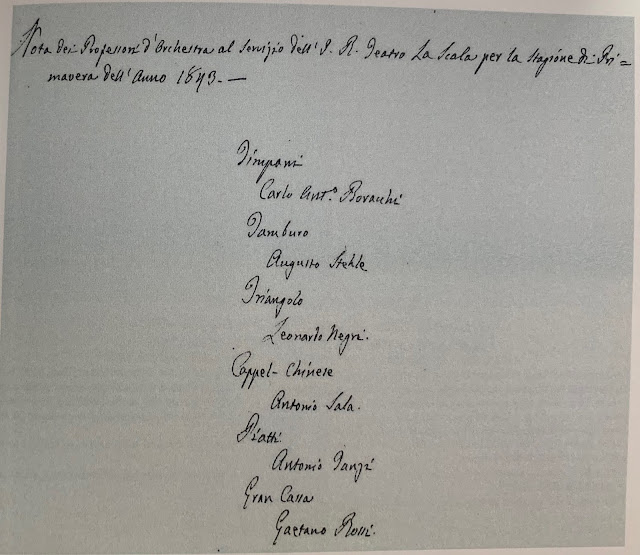 My project started with a visit to the local flea market, where I bought a horrendous old lamp. Ugly as hell, but perfect for the idea I had in mind...


I dismateled it down to pieces, took the cables off, cleaned it...

The "wings" of my crescent would be the lamp arms, which I attached to the "vases" holding the bulbs. I first marked two diametrically oposed points...

...and then drilled, first marking with a punch so the bit doesn´t slip. Then I used progresively larger bits untill I got to the desired diametre.

Then it was just a matter of screwing the "wings" using the same nuts the lamp already had.

With the "wings" done, all pieces ready, and using the central rod the lamp already had, I started skewering and combining the different pieces. I also hang sleigh bells from the different "umbrellas". As always, I punched before drilling, and then used progresive sizes of bits. I attached the sleigh bells using leather straps.

Looking for inspiration I found this crescent. I liked the bottom part very much, so I tried something similar: 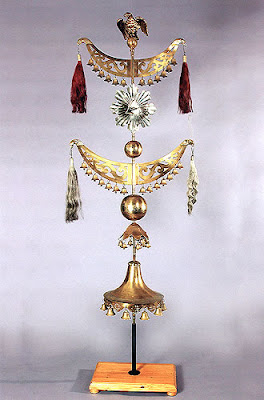 How to do it? I had some cymbals laying around. I collected then when I was trying to learn how to weld bronze. One of them was a 10" Sabian Pro Sonix, the only blemish being some cracks around the hole. Perfect for the job! Using an angle mat I marked 20 points:

I marked and drilled as usual, got rid of the logos to make it look more "authentic" and "historical" and hang the bells around its perimetre using leather straps:


This is how it looks on the instrument:

As you can see, the central rod is visible, as I ran out of lamp parts to cover it, so I paid another visit to the flea market to get another batch of horrendous lamps...

Here´s how it ended up. You can also see how I finished off the whole thing at the end (using one of the remaining "cups"):

I added sleigh bells to the new "umbrellas":

I also covered the holes the "dome" still had. I got some extra volutes at a scrap yard (which I visited to get raw material for a project I´ll write about in the future 😉). I used a file to shape the arms to the round surface of the "dome", and fixed them using screws:

I added some more bells, and this is the final result on the "dome":

As a final detail, I added the horse hair traditionally present on these instruments. 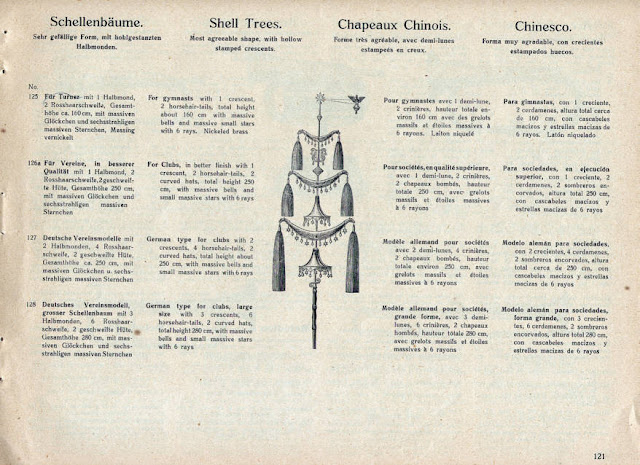 I bought some red tassels at a local haberdashery and hang them from the lower arm:

Now, a pole was needed to hold the whole thing, so I got a bronze finished curtain pole at Leroy Merlin.

I also got some door stoppers, which I lightly sanded, to help me put everything together.

Now I just had to stuff the "Christmas tree" into the pole:

Because this instrument is sometimes played hitting the floor, I kept the rubber feet the pole already had.

I also made some pads using yoga mats should maestri don´t want the stompig noise against the floor.

I was able to make an instrument which was inmensely popular for some centuries and was abandoned when orchestras increased in size, bass drums and cymbals became larger and larger and their volume covered the sound of the Turkish crescent, making it useless. Nowadays, this instrument is a must if you are into historically informed performance. Would you add it to your section? 😉 Stay tuned, as I will soon upload some video files.