The New Year´s concert, the "Österreichische locke" and tradition on snare drum.

With the New Year´s Concert still fresh, today I´d like to write about something we all like: the snare drum "solo" preceding the traditional "Radetzky March".

Here you have the snare drum part. Apart from some missprints here and there which can be easily corrected on the go, there´s nothing on it indicating an introduction: 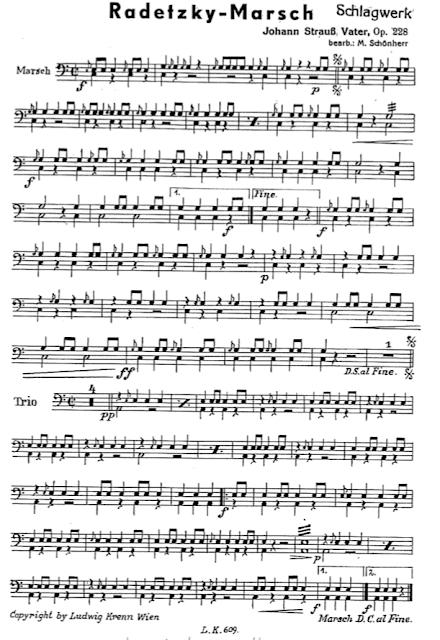 Where do those eight bars come from? The answer is easy and obvious should you have ever played in a wind band. From time to time, and in order to allow wind players to rest, there are moments during a parade where the band stops playing music. During that "resting time" in which musicians are not playing, they still march and mark time and, for them to do it rhythmically, there´s one musician that doesn´t stop playing: the drummer. The drummer plays a marching beat (which one depends on the country, tradition, type of music, personal taste...) and, when the drum major wants the music to start, he "signals the drummer, the drummer rolls off and the band picks it up without any loss of time".

Well, the "solo" we hear right before the Radetzky March is a roll off indicating the rest of the band that they have to start playing at the end of the eight bar phrase. That "call" also dictates, quite obviously, the tempo. Is that "call" something played at random? No... We can´t forget the Radetzky March is military music written in an country with great musical and martial tradition, belonging (at that time) to the Austro-Hungarian Empire, very proud of its traditions. Every infantry and cavalry has its own beats and signals, so each one of them has their own roll offs.

These eight bars played before the Radetzky March form the "Österreichische Locke" ("Austrian Roll Off"), which every Austrian musician knows, as it´s part of their tradition and musical heritage.

As you can see, it´s a phrase intimately related to the Austrian military and musical tradition. There´s no need to write it down, as every drummer knows it. If we want all the musicians in the orchestra to start playing without a cue from the conductor, all they need is that eight bar phrase.

Do more roll offs exist? Of course... There´s also the "Deutsche Locke" ("German Roll Off"), in use in this country and in 6/8 (also a typical marching bar):

These roll offs are not only played in Europe. In quite a few South American countries (Chile, Paraguay, Perú...) this "calls" are played due to the Prussian influence, as Prussian officers were in charge of putting together, organizing, arranging and training the new armies of the new countries after their independence from Spain.

There are also roll offs in the United States...

Are those drums, bass drum and cymbals at the beginning coming from Alfred Newman´s inventiveness? No... That introduction proves he knew well the military tradition, as he is literally quoting a roll off. I found this roll off in page 57 of  Sanford Moeller´s "The Moeller Book: The Art of Snare Drumming". The book was published in 1925 (quoting music dating back many decades -centuries!- ago), the fanfare was composed in 1933. See how internalized we have military, popular, sacred music...? Much more than we think.

Before fininshing, I´d like to show you the version of the Radetzky March that, under Óliver Díaz, the Gijón Symphony Orchestra recorded live during the 2005 New Year´s Concert. Truly yours on snare drum:

Now you know your stuff... Next time a conductor asks you to play an introduction to "Radetzky March", you won´t be wrong with the "Österreichische Locke". That will be the most authentic and true to the original spirit.
Should you want to play in the true Viennese style, feel free to download my own edition of the percussion part. Upload your videos, photos and tag me. I´ll be happy to know my version is played around the world. Here´s a pdf: RADETZKY MARCH.

I´d like to thank Manolo Durán for his help and knwoledge.