From March 20th to 25th I played Bartok´s masterpiece "The Miraculous Mandarin" with the OSPA. This works includes a peculiar bass drum part, in which stems up indicate notes to be played with the righ hand and stems down those to be played with the left one. It also asks for a "flexible rod" to be used on the left hand (in the original edition).

Because of the part, indications, context, type of music, the knowledge Bartok had on folklore (he travelled Turkey, the Balcans and Central Europe) and the explanations given by our conductor Rossen Milanov (a Bulgarian who knows this music very well), I soon realized this bass drum part was clearly influenced by the davul.

Having asked my principal (Rafa Casanova) and the person in charge of the part (I was playing xylo, triangle and tam-tam), it was decided to try my davul. We all liked it and, apart from a timbrical point of view, the scenic and visual ones got really reinforced.


As you can see, it was played the traditional way (hanging from a shoulder) and using the sticks associated with it: a very thin, flexible rod with the right hand and a "spoon shaped" wooden stick with the left one. You can see them in detail on the next photo.

What´s a davul? We already mentioned it on "Percussion archeology" but, today, we´ll be more specific about its history, technique and usage

The davul is an instrument of Turkish origin, intimately related to the janissaries, the sultan´s elite troops. They were accompanied by bands named mehterân (a mehter is a musician who is part of the mehterân), the davul being one of the instruments in these bands. 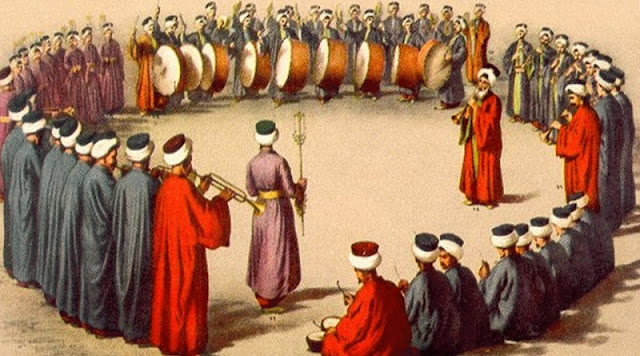 The davul is a wooden drum of variable size (ranging between 18" and 36" in diametre and about 10" in depth), two headed, which is held so both are practicable. The right hand holds a wooden spoon shaped mallet in charge of the bass tones, the left one holds a thin dowel in charge of the ornaments. The right hand holds its stick in the regular way, but the left one holds it so the fingers can be used, permiting very intrincate figures. A technique which, centuries later would be known as "one handed roll" or "freehand technique" (popularized by Johnny Rabb, among others) is a trademark of this instrument, producing several strokes with just one action. This dowel evolved to become our Central European "rute".

Because of the expansion of the Ottoman Empire, the instrument (together with its partners in the mehterân) got to be known in the conquered territories, becoming very popular in the Balcan Peninsula, where it´s know as  tapan, (that´s how our conductor named it), tupan, daul, toba, tof, daouli, tupana, lodra, doli, dwola...

I´m sure Bartok got to know it during his ethnomusicological travels, and got his inspiration from it to write the bass drum part for "The Miraculous Mandarin".

Obviously, Europe got to know this instrument because of its wars against the Turks (who besieged Vienna). We adopted it (see Haydn´s "Military Symphony", Mozart´s "Abduction from the Seraglio", Beethoven´s Symphony #9...) and, from there, it evolved into our present bass drum. The following photo shows two very close relatives: a davul (great-great-grandfather) and a bass drum (great-great-grandson):


How does a davul sound? Here you have some videos:

You can see it here played in context, in a mehterân:

As you can see, the journey of the davul starts as a military instrument, continues as a folkloric one and ends with "classical" music. A mutual influence, a transfer between different human expressions.

The percussion section and the conductor absolutely loved my davul. It goes without saying that we can use it on any folkloric or janissary influenced music (already mentioned above). Curiosity, imagination, knowledge and respect to tradition should be our guides when it comes to choosing an instrument for any particular work.

Will you give the davul a chance?