Some weeks ago I saw a video by Tony Ames (principal percussion with the National Symphony Orchestra) which got my attention. That video feautures him playing the famous snare drum excerpt from the third movement of "Scheherezade" using just one hand.

You know I always try anything that can lead to a technical improvement or entails a new music making possibility. I try and work on it until I get something that wasn´t previously in my musical arsenal. Any new option is more than welcome.

As always, and before going on, here´s the part we are dealing with: 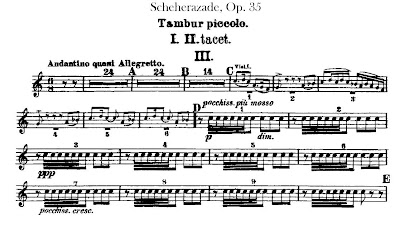 
This solution is a very interesting one, as we get a very atractive phrasing: the seven stroke roll is nicely tapered down, resulting in a very elegant and musical diminuendo. Also, the hand alternation can´t be heard, making for a very homogeneous phrasing.

Despite what it may seem, it´s not difficult to play (if we know how to get it). In my previous article "Snare drum technique: the roll" , I wrote about rebound control, and showed a video on which I was getting eight controlled rebounds. Put into context, what I´m doing here is getting a six stroke controlled rebound with my right hand, finishing it with my left one to complete the seven stroke roll and, again, use my right hand to strike the remaining three eight notes of the bar. I´m also using a "trick" I explained in the above mentioned article: I´m moving horizontally across the head in order to facilitate bouncing but, if you noticed it, I´m not moving my stick as much as Mr. Ames does, and I´m moving it more in a diagonal line instead of "vertically", trying not to get an evident timbrical change.

Moved by curiosity, I wanted to check if there was visual corespondence with what I heard and, using an audio editor, the graphic result of this one-handed "Scheherezade" is a follows (bare in mind we have a double wave because the audio was recorded in stereo):


We can clearly see every single stroke of our seven stroke roll, together with a progresive diminuendo (see the amplitude of each wave is smaller than the preceding one). We should not hear with our eyes, but it´s always a relief to visually confirm our hearing impression.

I´d like to know your opinion on the musical effect this way of playing results in. I will soon post an article on the many ways this famous excerpt can be played.

Give me your opinion!, Let me know!